This morning, I hit one of those low spots. I thought things couldn’t get any worse. With the discovery at breakfast that, on Sundays the ferry from Portaferry to Strangford does not start before 10.00, plus heavy rain and strong Southerly headwind, my plans to meet some of the Newcastle crew (no, I haven’t woken up in the North East of England, this is County Down, N.I.) at mid day were scuppered.
Thankfully, I was right. They didn’t get worse. The rain stopped in good time to blast me dry.

When I reached Newcastle things continued to change rapidly for the better. A busy seaside town with lots of character and a Lifeboat Station somewhere easy to find, not surprisingly alongside the old harbour in a white Boathouse flying a big RNLI flag.

Right next to the old Harbour Inn, exactly as described a little earlier on the phone. To make things even easier, a few jolly characters in Lifeboat jerseys spotted me and marshalled me in, to the encouraging sounds of cheers and a smattering of applause. At that moment the sun came out. Along with the warm, firm handshakes, I even had a hug from the boss, Lisa the LOM. At this moment, I thought things couldn’t get any better. This time I was wrong. Things got better by the minute.

In short, a great crew, an historic Lifeboat Station, a lovely old Merseyside All-weather Lifeboat, some fascinating links and connections with Bristol, my home port and, to top it all, a great new scheme began to emerge over a cup of tea, then finalised over a bowl of seafood chowder. One of the requirements of a good Lifeboat Operations Manager must include good lateral thinking and a belief that “if it’s meant for you, it won’t pass you”. Why battle on to the next Station in these conditions? Tomorrow,  the wind will have dropped, the views of the backdrop, the magnificent Mountains of Mourne, will be visible and the next Lifeboat Station en route are happy to be visited at a more sociable hour than a late Sunday afternoon (thanks John at Kilkeel, see you tomorrow).

Many thanks to Lisa (LOM), Paul (Head Launcher*), Nathan (Helm/Nav/acting Mech/LPO), William (Cox’n), Jim (AstMech), and crew members Karl, Orlaith and Lauren for such a great time and all the treats! My Newcastle Lifeboat hoody will be worn with pride but perhaps not in bed in the room you’ve sorted for me in the Harbour House Inn.

Newcastle, County Down has had a Lifeboat since 1825, which moved across Dundrum Bay to this harbour in 1854. This is one of (if not THE oldest) the oldest Lifeboat Stations, with a great history and a huge haul of medals, of which you can find out more by clicking HERE.

Behind the lifeboat station is Widows Row, homes built for some of the widows and families of local fishermen lost at sea. A copy of an historic document hanging on the wall here at the Old Harbour House Inn bears the harrowing list of the 73 lost and their bereft, surviving dependants as a result of just one disastrous storm. 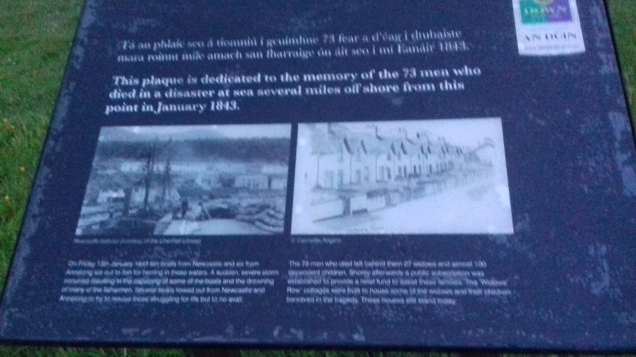 Newcastle’s Dundrum Bay also shares a fascinating link with Bristol, this being the place where the then still new SS Great Britain ran aground when the captain mistook the St John’s Point Lighthouse for one on the Isle of Man and tried to sail around it. A great story, which involved I.K. Brunel himself coming over to devise the means of re-floating the world’s biggest, first iron, screw driven passenger liner. It took 9 months and involved the building of a temporary harbour. After a long, successful career the SS GB is now back in its original Bristol Dock as part of one of the country’s best maritime museums.

* No, this does not mean that Paul is in charge of a giant catapult for warding off the next invasion.

2 thoughts on “Portaferry to Newcastle”